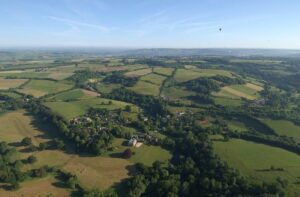 The Parish of Combe Hay lies south of Bath and encompasses the steep Cam Valley with its attractive beech woods.

The village of Combe Hay (population 150) sits in the south-east of the parish. The village includes a church with a 15th-century tower, the Georgian Combe Hay Manor and Georgian former rectory. It is bordered by the Cam Brook.

Combe Hay is the site of a series of locks on the former Somerset Coal Canal, dating from 1805. Here can be found the remains of one of the very few Caisson locks ever built. Many of the locks and associated workings are listed buildings. Combe Hay was also formerly served by the Camerton and Limpley Stoke Railway.

For nearly a hundred years until 1980 there were Fuller’s earth mines in the parish.

Combe Hay Church is used both for religious services and as a meeting place for village activities, including the community library. The Parish Council, which has seven members, normally meets here on the third Wednesday of alternate months (currently online). Additional meetings are sometimes held to meet planning consultation deadlines.

Combe Hay Parish Council has responsibility for local issues including setting an annual precept (local rate) to cover the council’s operating costs and producing annual accounts for public scrutiny. The Parish Council evaluates local planning applications and makes recommendations to Bath & North East  Somerset Council (B&NES). It works with the local police and B&NES on matters of crime, security and traffic. The Parish Council’s role also includes initiating projects for the maintenance and repair of parish facilities as well as consulting with B&NES on the maintenance, repair and improvement of highways, drainage, footpaths, public transport and street cleaning. Conservation matters (including trees and listed buildings) and environmental issues are also of interest to the council.

This website uses cookies to improve your experience while you navigate through the website. Out of these, the cookies that are categorized as necessary are stored on your browser as they are essential for the working of basic functionalities of the website. We also use third-party cookies that help us analyze and understand how you use this website. These cookies will be stored in your browser only with your consent. You also have the option to opt-out of these cookies. But opting out of some of these cookies may affect your browsing experience.
Necessary Always Enabled
Necessary cookies are absolutely essential for the website to function properly. This category only includes cookies that ensures basic functionalities and security features of the website. These cookies do not store any personal information.
Non-necessary
Any cookies that may not be particularly necessary for the website to function and is used specifically to collect user personal data via analytics, ads, other embedded contents are termed as non-necessary cookies. It is mandatory to procure user consent prior to running these cookies on your website.
SAVE & ACCEPT